Android applications can contain compiled, native libraries. Native libraries are code that the developer wrote and then compiled for a specific computer architecture. Most often, this means code that is written in C or C++. The benign, or legitimate, reasons a developer may do this is for mathematically intensive or time sensitive operations, such as graphics libraries. Malware developers have begun moving to native code because reverse engineering compiled binaries tends to be a less common skillset than analyzing DEX bytecode. This is largely due to DEX bytecode can be decompiled to Java whereas native, compiled code, often must be analyzed as assembly.

The goal of this section is not to teach you assembly (ASM) or how to reverse engineer compiled code more generally, but instead how to apply the more general binary reverse engineering skills, specifically to Android. Because the goal of this workshop is not to teach you the ASM architectures, all exercises will include an ARM and an x86 version of the library to be analyzed so that each person can choose the architecture that they are more comfortable with.

If you don’t have previous binary reverse engineering/ assembly experience, here are some suggested resources. Most Android devices run on ARM, but all exercises in this workshop also include an x86 version of the library.

To learn and/or review ARM assembly, I highly suggest the ARM Assembly Basics from Azeria Labs.

The Java Native Interface (JNI) allows developers to declare Java methods that are implemented in native code (usually compiled C/C++). JNI interface is not Android-specific, but is available more generally to Java applications that run on different platforms.

The Android Native Development Kit (NDK) is the Android-specific toolset on top of JNI. According to the docs:

In Android, the Native Development Kit (NDK) is a toolset that permits developers to write C and C++ code for their Android apps.

Together, JNI and NDK allow Android developers to implement some of their app’s functionality in native code. The Java (or Kotlin) code will call a Java-declared native method which is implemented in the compiled, native library.

Android native libraries are included in APKs as .so, shared object libraries, in the ELF file format. If you have analyzed Linux binaries previously, it’s the same format.

Because native code is compiled for specific CPUs, if a developer wants their app to run on more than 1 type of hardware, they have to include each of those versions of the compiled, native library in the application. The default path mentioned above, includes a directory for each cpu type officially supported by Android.

Before an Android app can call and execute any code that is implemented in a native library, the application (Java code) must load the library into memory. There are two different API calls that will do this:

The difference between the two api calls is that loadLibrary only take takes the library short name as an argument (ie. libcalc.so = “calc” & libinit.so = “init”) and the system will correctly determine the architecture it’s currently running on and thus the correct file to use. On the other hand, load requires the full path to the library. This means that the app developer has to determine the architecture and thus the correct library file to load themselves.

The Java to Native Code Connection

A Java-declared native method appears in the Java code as below. It appears like any other Java method, except it includes the native keyword and has no code in its implementation, because its code is actually in the compiled, native library.

There are 2 different ways to do this pairing, or linking:

According to the spec, the developer would name the function as follow for the system to be able to dynamically link the native method and function. A native method name is concatenated from the following components:

In order to do dynamic linking for the Java-declared native method below and let’s say it’s in the class com.android.interesting.Stuff

The function in the native library would need to be named:

If there is not a function in the native library with that name, that means that the application must be doing static linking.

When reverse engineering, if the application is using the static linking method, we as analysts can find the JNINativeMethod struct that is being passed to RegisterNatives in order to determine which subroutine in the native library is executed when the Java-declared native method is called.

The JNINativeMethod struct requires a string of the Java-declared native method name and a string of the method’s signature, so we should be able to find these in our native library.

For the native method

The type signature is

Here’s another example of a native method and its signature. For the following is the method declaration

It has the type signature:

Exercise #5 - Find the Address of the Native Function

In Exercise #5 we’re going to learn to load native libraries in a disassembler and identify the native function that is executed when a native method is called. For this particular exercise, the goal is not to reverse engineer the native method, just to find the link between the call to the native method in Java and the function that is executed in the native library. For this exercise, we will be using the sample Mediacode.apk. This sample is available at ~/samples/Mediacode.apk in the VM. Its SHA256 hash is a496b36cda66aaf24340941da8034bd53940d1b08d83a97f17a65ae144ebf91a.

The goal of this exercise is to:

From the Android JNI Tips documentation:

The C declarations of JNIEnv and JavaVM are different from the C++ declarations. The “jni.h” include file provides different typedefs depending on whether it’s included into C or C++. For this reason it’s a bad idea to include JNIEnv arguments in header files included by both languages. (Put another way: if your header file requires #ifdef __cplusplus, you may have to do some extra work if anything in that header refers to JNIEnv.)

Here are some commonly used functions (and their offsets in JNIEnv):

When analyzing Android native libraries, the presence of JNIEnv means that:

Here is a spreadsheet of the C-implementation of the JNIEnv struct to know what function pointers are at the different offsets.

In practice, in the disassembly this shows as many different branches to indirect addresses rather than the direct function call. The image below shows one of these indirect function calls. The highlighted line in the disassembly shows a blx r3. As reversers, we need to figure out what r3 is. It’s not shown in the screenshot, but at the beginning of this function, r0 was moved into r5. Therefore, r5 is JNIEnv*. On line 0x12498 we see r3 = [r5]. Now r3 is JNIEnv (no *).

On line 0x1249e, we add 0x18 to r3 and dereference it. This means that r3 now equals whatever function pointer is at offset 0x18 in JNIEnv. We can find out by looking at the spreadsheet. [JNIEnv + 0x18] = Pointer to the FindClass method

Therefore blx r3 on line 0x124a4 is calling FindClass. We can look up information about FindClass (and all the other functions in JNIEnv) in the JNIFunctions documentation here.

Thankfully, there’s a way to get the JNI function without doing all of this manually! In both the Ghidra and IDA Pro decompilers you can re-type the first argument in JNI functions to JNIEnv * type and it will automatically identify the JNI Functions being called. In IDA Pro, this work out of the box. In Ghidra, you have to load the JNI types (either the jni.h file or a Ghidra Data Types archive of the jni.h file) first. For ease, we will load the JNI types from the Ghidra Data Types archive (gdt) produced by Ayrx and available here. For ease, this file is available in the VM at ~/jni_all.gdt.

To load it for use in Ghidra, in the Data Type Manager Window, click on the down arrow in the right-hand corner and select “Open File Archive”. 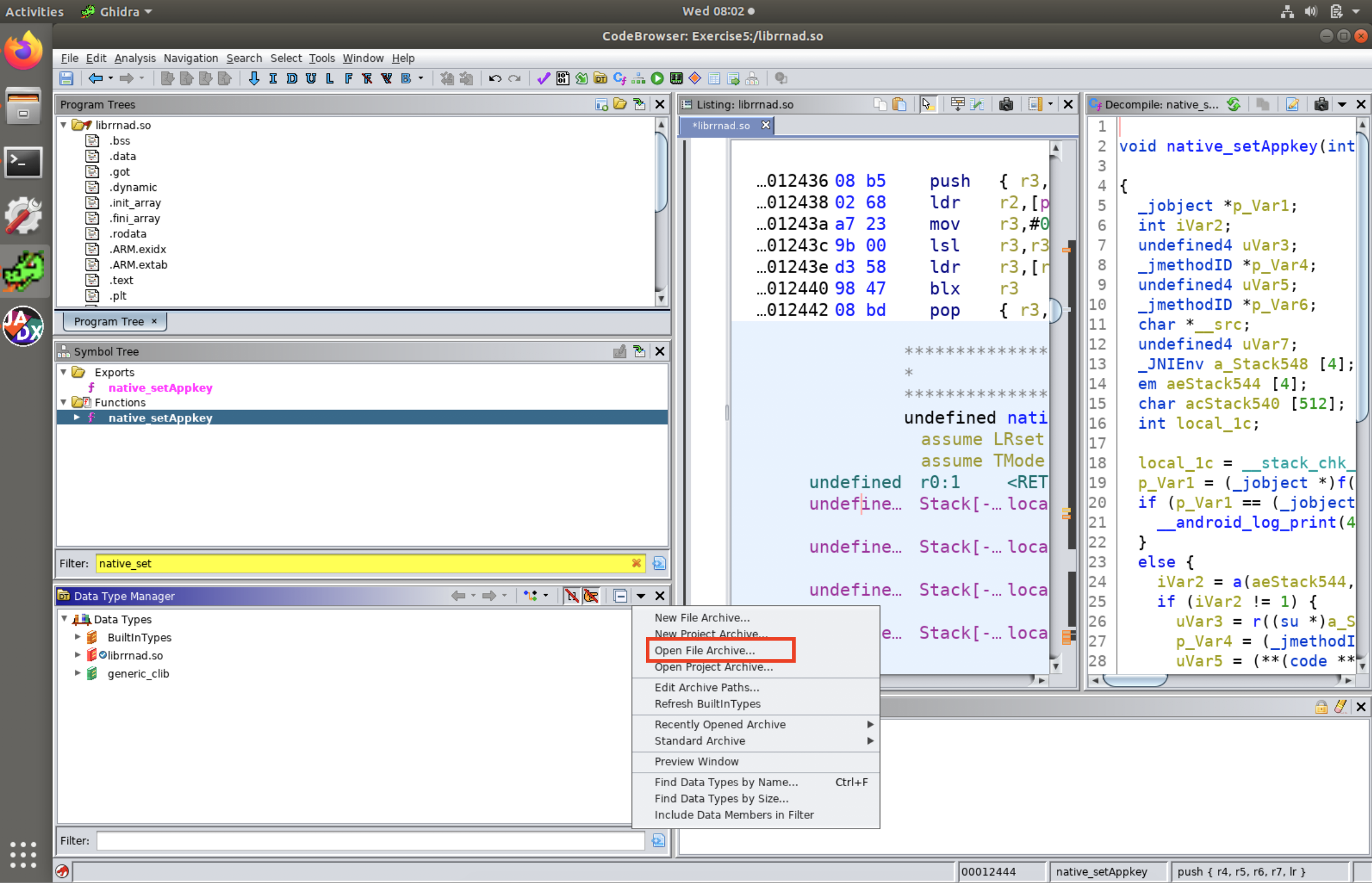 Then select jni_all.gdt file to load. Once it’s loaded, you should see jni_all in the Data Type Manager List as shown below. 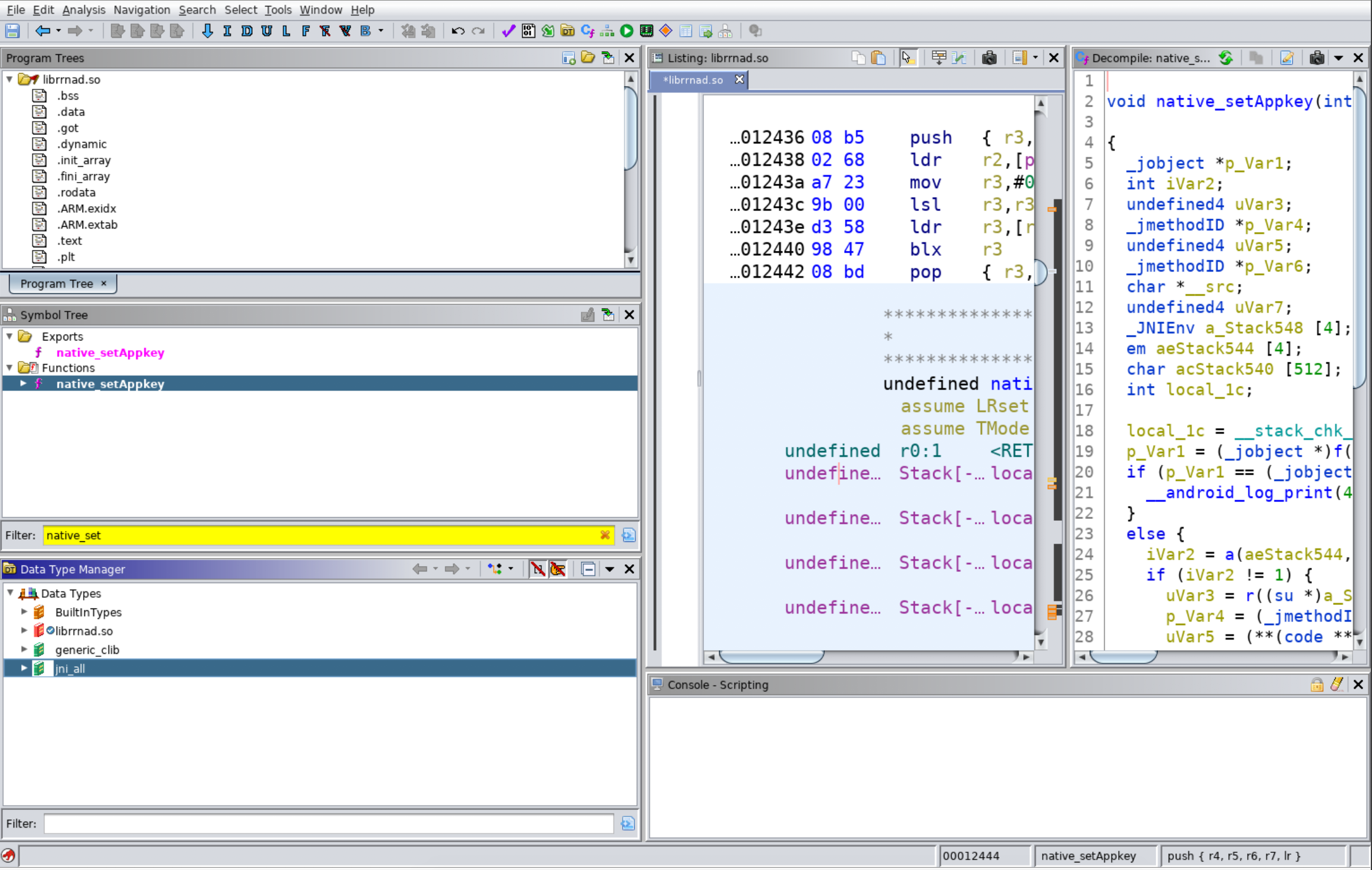 Once this is loaded in Ghidra, you can then select any argument types in the decompiler and select “Retype Variable”. Set the new type to JNIEnv *. This will cause the decompiler to now show the names of the JNIFunctions called rather than the offsets from the pointer. 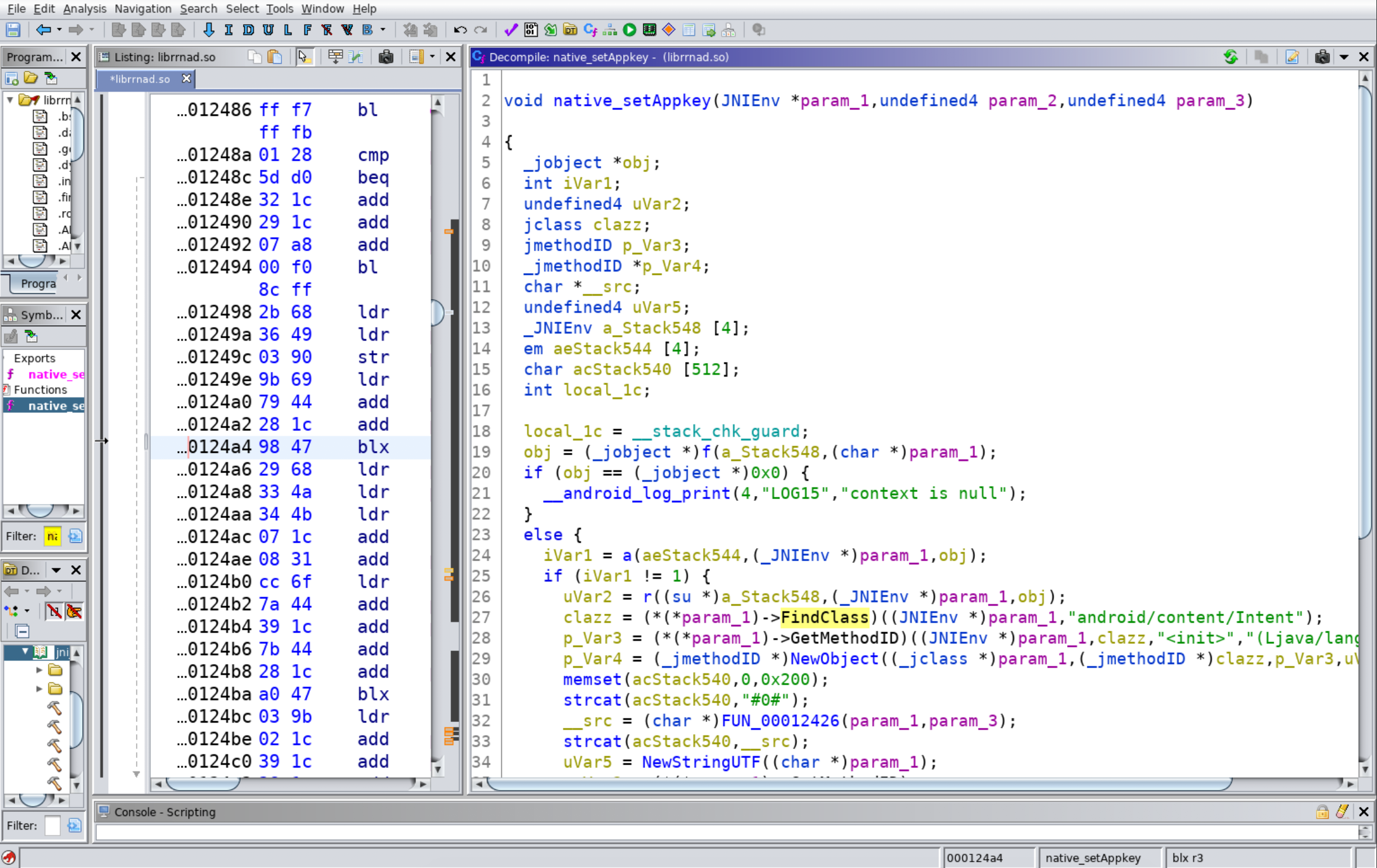 We are going to point all of our previous skills together: identifying starting points for RE, reversing DEX, and reversing native code to analyze an application that may have moved its harmful behaviors in native code. The sample is ~/samples/HDWallpaper.apk.

The goal of this exercise is to put all of our Android reversing skills together to analyze an app as a whole: its DEX and native code.

You are a malware analyst for Android applications. You are concerned that this sample maybe doing premium SMS fraud, meaning that it sends an SMS to a premium phone number without disclosure & user consent. In order to flag as malware, you need to determine if the Android application is:

Go on and reverse!